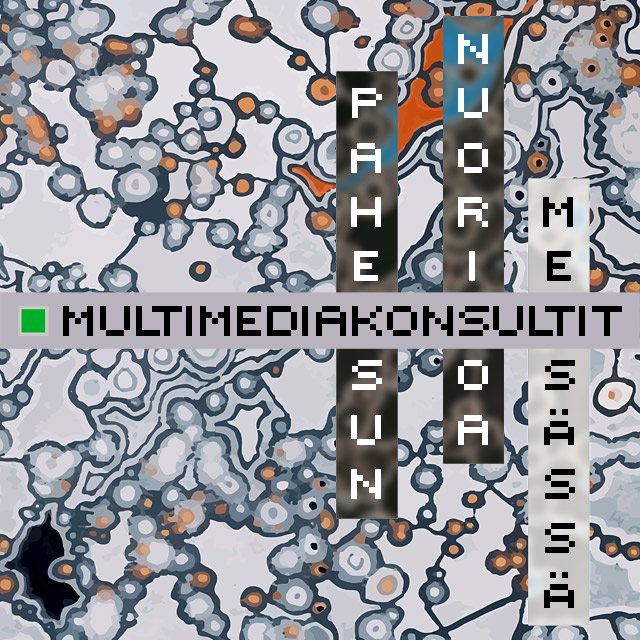 In the noughties, Multimediakonsultit became known as an idiosyncratic labour music band making sarcastic songs about the life of IT workers. Now the band digs itself from the grave for a moment to release an album of previously unreleased music. The lp Sielujen teurastamolla (“At the slaughterhouse of souls”) will be released early next year, and Paheksun nuorisoa (“I resent the youth”) is the first single from it.

Paheksun nuorisoa is a generation song that makes further generation songs unnecessary. In the song, the youths of all eras are resented away at the same time. Both Kalle “Loiriplukari” Taivainen and Aino “Sanniplukari” Lehtovaara visit as guest singers. The second track on the single is a folk ballad completely alienated from the nature, Metsässä (“In the forest”).

Like Multimediakonsultit, also Kupittaa has activated itself after a long silence. But unlike their rehearsal room pals, Kupittaa is planning to continue from where they were after Kaikki laulut kertovat rakkaudesta (“All the songs tell about love”) got into radio playlist rotation over a decade ago. “The band was never disbanded, we just got tired”, told Kupittaa’s singer Ville Mättö recently in an interview with Turun Sanomat (in Finnish).

On the upcoming single Propagandaa (“Propaganda”), the band steers their sound towards harsher tones than before. More new Kupittaa songs will come out next year.

Both singles are digital, and they’re available on their release dates on Spotify, Apple Music, Google Play, YouTube Music and Tidal, among others. Kupittaa’s single will be released on 29th of November and the Multimediakonsultit single the next day, 30th of November.

You can add both singles already on your Spotify playlist. Preorder Propagandaa here, and Paheksun nuorisoa here.

The bands will throw a release gig together on Saturday 30th of November in Pikku-Torre, Turku, Yliopistonkatu 30. You are warmly welcome!